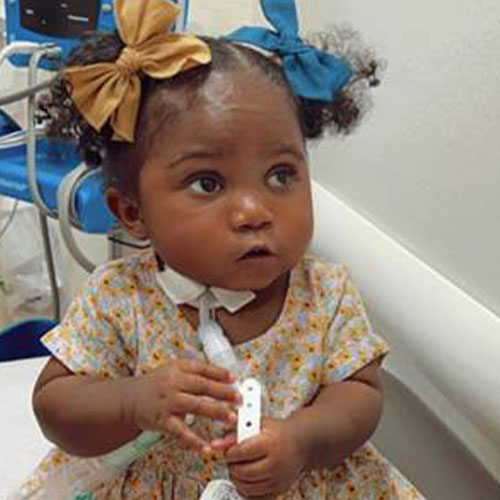 My husband and I found out we were pregnant with Grace a day before our one year wedding anniversary! We were thrilled to be able to bring another baby into our family! Our oldest at the time was three!

My husband and I then found out about Grace’s diagnosis during utero when we were right around 20 weeks while doing our genetic testing and ultrasound. We were told she would need open heart surgery at birth and several times after throughout her life. We were floored and confused at all once! However we stood on our faith since hearing the news! We met with specialist and surgeons and every time through we were living in a dream. We often wondered how life would look with our second daughter being a special needs baby with Congenital Heart Disease and navigating that life.  Grace was admitted to the CICU (Cardiac Intensive Care Unit) when she was born and stayed in the ICU for forty days as a newborn. We were then told told that Grace had a large VSD, with Pulmonary Atresia, and Tetralogy of Fallot along with Mapcas (Major aortopulmonary collateral arteries). She was being monitored and evaluated to determine if she was stable enough to go home without surgery to grow more and become stronger before open heart. The doctors later determined she was stable and able to go home.

Grace met her big sister Genesis for the first time when she was released from the hospital (July 29th 2020) and since then they have had a remarkable bond and Genesis prays every night for her little sister and her heart and healing! Our journey began and we noticed Grace needed several visits to the hospital before her initial surgery. We began to navigate life in the ICU everyday while Grace was there under strict Covid restrictions and also seeing our oldest daughter daily at home.
It’s still a journey.

Grace was eventually listed in late November to have her open heart Surgery in December 2020. As we prepared and gained so many cuddles with her at home before the big day we received two phone calls that surgery would be pushed back until December 11th 2020! We then arrived at the hospital on December 10th to get into a ICU room and preparation for surgery the next day. Grace made it through a 13 hour surgery on December 11th with Dr.Gulerserian completing a unifocalization of mapcas, with repairing her Tetralogy of Fallot with pulmonary atresia. Grace had been in the CICU for more than half her life while trying to overcome many airway and breathing difficulties (she was hooked up to the Ventilator and had one unsuccessful attempt at removing the breathing tube which resulted in CPR) and along with some feeding challenges and having two catheterization laboratory procedures to help open her pulmonary valve that had some thinning and needed opening to allow good blood flow! Also Grace received a tracheostomy to help keep her lungs healthy and allow her body time to grow and vessels to get bigger in order for her to get better quality breathing on her own! We are so hopeful that this day will come soon! We as Grace’s parents have been by her side daily while she’s been on this tough journey. We have experienced many hardships during this journey but have remained positive and truly trusting in the Lord and his plans over Grace’s life.

Next steps for Grace – we just finished up a Cardiac CT scan last week to get a clear picture of her heart and growth – we are waiting on final results and to talk about the next future surgery to help her heart heal and removing of the Trach.

Her daily care consist of – multiple breathing treatments every six hours, medications throughout the day for her heart, lungs, stomach and development. Also with the tracheostomy it has to be cleaned daily and new equipment applied weekly! It’s a full time job and a lot of medical needs!