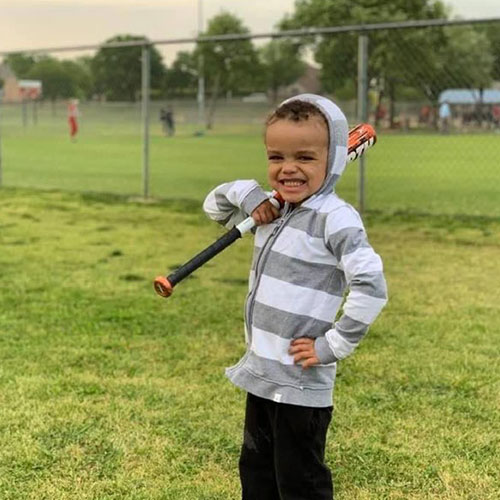 On Sunday, March 16, 2019, 18 month old Hudson was taken to Children’s Plano with what we all thought was dehydration due to a stomach virus. He was quickly transferred by ambulance to Children’s Dallas and within 15 minutes of us arriving, we were asked to leave the room as our baby went into cardiac arrest. He endured 40 minutes of CPR while trying to be placed on ECMO.  He was successfully placed on ECMO and diagnosed with Viral Myocarditis. Cultures came back that Wednesday and a strand of the MONO virus attacked his heart, which caused him to go into heart failure.  Prior to this, Hudson was a perfectly healthy 18 month old, playing at the ballpark.

Hudi was making lots of good strides the first week, but Saturday, March 23 he developed Sepsis.  They felt it was under control and he passed all of his ECMO tests, so doctors decided to take him off ECMO on March 27.  The first 8 hours he did well, but then overnight he began to go into organ failure due to sepsis and his heart not being strong enough to fight infection.  They quickly put him back on ECMO on March 28 and all his organ function has been back to normal.  Hudson is still fighting this infection, but Doctors are concerned his heart function is not returning to normal.  So the process for a Heart Transplant has been started and it seems that is the path we are headed.  Current cultures from sepsis are coming back clean 30 hours and counting, we need this to continue.  Next week he will be placed on a VAD hopefully and either his heart will improve or he will go on the waitlist for a heart.

Our miracle baby made it out of the hospital late May on several heart medications.  At the beginning of September 2019 he was admitted after a doctor’s appointment showed his numbers and echo were not where they needed to be.  At this time they decided to place him on a Bi-lateral pacemaker.  His pacer had to work at 100% due to developing pacemaker induced cardiomyopathy. Doctors now feel with his heart failure medication maxed out, that the next step is towards a heart transplant because sadly his heart didn’t recover fully.  His heart failure number continues to increase unfortunately.

Kelly had been denied coverage by Aetna for Dallas Children’s and Aetna insisted that Kelly must move to Houston for Hudson to be placed on the heart transplant list.   Kelly appealed the denied coverage for Hudson to get his continued care at Dallas Children’s.  In February of 2020 Hudson was placed in the hospital for failure to thrive. This allowed for his insurance to approve Dallas Childrens as in network. He lived in the hospital from February 2020 to September 2020 when insurance changed and Dallas Childrens was not in-network. He went home with a constant Milrinone drip on his PiCC line that he wore a backpack for.

Finally, Sunday – November 29th 2020, we received the call that there was a heart available. Hudson received his angel heart the next day! He is thriving and now is living his best 4 year old life with his new heart. He has checked out great at every doctors’ appointment since.  There were many battles throughout this journey, and although Hudi might not have won every battle, his fighting spirit and big smile helped this little warrior win the war!