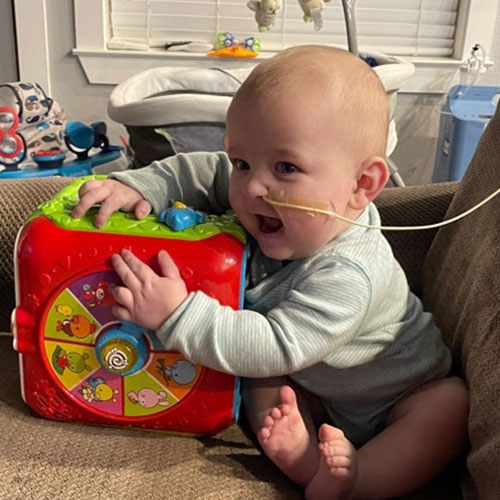 On October 8, 2019 we were expecting just our normal sonogram checkup, but our appointment ended with us being sent over to a pediatric cardiologist for further testing. Ledger, at 15 weeks gestation, was diagnosed with Hypoplastic Left Heart Syndrome (HLHS).

Ledger was born March 9, 2020 in Dallas and within hours of birth was sent over to Children’s Medical Center, where he was for 203 days. During that time, there were many obstacles that he had to overcome, many times with us not knowing what the outcome would be.

With HLHS, there is 3 surgeries (Norwood, Glenn, and Fontan) to help “reroute” the blood flow through his body, and take some work off the right ventricle, since he is unable to use the left side of his heart.

On March 16, at one week old, he had his first open heart surgery, the Norwood. Ledger was a rockstar and got through the surgery great, but his lungs needed some extra time and help to recover, which kept him intubated for 2 weeks. During his intubation period, Ledger had atrial flutters 2 separate incidences, 2 days in a row. During these times, his heart rate got over 250 bpm. Because it was beating so fast, he needed a cardioversion procedure to shock his heart back to normal range. The first instance, he had to be shocked twice, but only once for the second. Luckily, after being put on 2 medicines to help with his heart rhythm, it has been controlled since.

Once extubated, Ledger started doing really well and was moved from ICU to the step-down unit, then up to the 8th floor, where our next step was to be released. The week we were to be released, during a routine X-Ray, a small air bubble was seen in Ledger’s stomach lining along with bloody stools. So, with this, he was put on NEC (Necrotizing Enterocolitis) watch 3 times. Two of these times, he luckily only had to be NPO (Nothing by Mouth) for only a few days, but one of the times he had to do 8 days with no formula. During that time, he was on IV TPN “Baby Gatorade in a bag” and Lipids to keep getting what his body needed.

About a week later, Ledger suffered from multiple strokes and seizures over a 4-day time period. Because of him becoming “High Risk”, Ledger was moved back down to ICU where he could be monitored more closely. He had to have a 24-hour EEG done to monitor his brain activity. He was put on three seizure meds and had to receive two Lovenox shots daily in hopes of keeping him seizure and stroke free. Once everything was back under control, we were sent back up to the 8th floor.
About another week later, Ledger started requiring more oxygen support and his color was going from a pink/tannish color to a dull/dusky color. Momma intuition kicked in and knew something was not right and requested an Echo to be done immediately. The echo found that his right ventricle was not squeezing good and he was sent back down to the ICU and within hours he was sent in for a CT scan. This showed a narrowing of his aortic arch which was causing flow obstruction. The next day, Ledger went into a heart cath procedure to try and balloon open the obstruction. Unfortunately, the cath procedure was unsuccessful. They saw where his aortic arch was patched during the Norwood was shrinking and twisting. So, on June 11,2020, Ledger went in for an emergency surgery to reconstruct his arch and clear the obstruction.

During this short period of time, Ledger’s heart function went from mildly diminished function to severely diminished function. His surgeon, Dr. Jaquiss, was hoping with the obstruction being cleared, the function of the right ventricle would improve. But his heart remained at severely diminished function and was put on medicine to hopefully help with this. A week after his function did not improve, Dr. Jacquiss came and talked with me about considering transplant. We agreed to do whatever we needed to, to help Ledger. Along with his function not returning to mild, his left vocal cord was paralyzed during surgery. This put Ledger taking anything by mouth at a complete hault due to him choking and not knowing how to handling just one vocal cord.
Because of his function being severely diminished and only having the right side, we began the transplant evaluation process to see if he would even qualify to be put on the transplant list. After running all the tests, Ledger was not a candidate for transplant because his antibody count was too high (99%), which means his body would have a 99% chance at rejecting a heart.

At this point, we knew our only option was to get as much improvement in his function as we could with medicine so he would qualify for the Glenn procedure. Luckily, his heart did improve from severe to moderate, which allowed him to be considered for the Glenn. Ledger did have to go through another heart cath to make sure the pressures in his heart were in range, which they were! So, on September 3, 2020, we handed our boy over for his third open heart surgery, the Glenn.

In regular Ledger fashion, he was a rockstar during surgery and was able to be extubated before being moved to the ICU. Once again, we were hoping for his function to improve, but unfortunately it went from moderate back down to severe. Our only option was to keep him on heart meds in hopes of getting him out of the hospital and able to go home and meet his siblings. Because of Covid-19, none of his siblings have been allowed in Children’s to meet him.

On September 27, 2020, day 203, Ledger left Children’s Hospital. We were released to go to an apartment just down the road from Children’s, where we stayed until November 6, 2020. On October 3, 2020, the siblings were finally all together!

Since being released Ledger has done incredibly well and has stayed out of the hospital, besides going in to get his G-Tube and circumcision. This was a tough decision to make because with him having to be intubated and be put under, he could go into cardiac arrest. For this easy procedure, they had to have his cardiac surgeon ready to jump into action if needed. But, once again, Ledger showed everyone how much of a miracle he really is.

Ledger is still working with Occupational Therapy and Speech to overcome his developmental delays. While at home, Ledger does have a nurse with him Monday through Saturday, which they have become like family. This has allowed Ledger to stay out of the hospital the times he did become sick because they were there to monitor everything.

After he got his G-Tube in May 2021, Ledger has been taking small amounts by mouth and showing interest in more. He is crushing his goals that OT has set for him, even with the damage that has been done to his brain from the strokes. Things do take him longer to accomplish, but he is so determined. Looking at him, you would never know all that he has been through. In all of our eyes, he is the strongest person we know!

Ledger has four siblings; KayLee (14), Bailey (12), Lincoln (4), and Lawton (3 months). Mom, Andrea, did retire from teaching because things are so unknown for him, but she stays busy at home with him and younger brother Lawton. Dad, Logan, owns and runs a gutter business out of Jacksonville. Having his own business has been a blessing while going through all of this because it has allowed more freedom for dad to help when needed.

GET IN TOUCH
Go to Top